Into the 20th Century 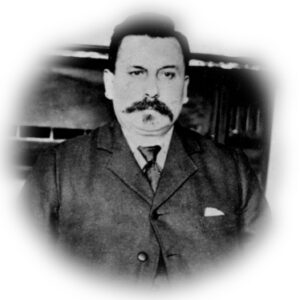 John Ord is appointed  Chief Inspector of Detectives, and the first Detective Constables are appointed.  Read More……
Police Committee agree to build a new ‘Central’ Police Headquarters at a cost of £36,000.

The Opening of the new Central Police Office (1906)

On 21 December, Glasgow Police begin to investigate the murder of Marion Gilchrist. On 26 December, Detective Inspector Pyper, accompanied by two witnesses, set sail for New York in pursuit of the suspect Oscar Slater and his girlfriend. They are arrested and brought back to Glasgow.   Read More………

The Scottish Cup Final, between Rangers and Celtic, takes place in Hampden Park. The match ends in a 1-1 draw and the referee refuses to play extra time. The crowds riot and police charge them with batons drawn, assisted by mounted officers. S.F.A. withhold Scottish Cup and medals that year.

Oscar Slater tried at Edinburgh High Court and found guilty of Murder. He was sentenced to death by hanging, but two days before the execution, he was reprieved and received life imprisonment. There began serious doubts as to Slater’s guilt but he remained in prison.

Faced with increasing complaints of serious housebreakings, the Chief Constable agrees to buy four Airedale Police dogs from Major Richardson in Essex.   The four dogs were delivered to the Central Police Office on 28 June 1910 and posted two to Maryhill and two to Queen’s Park Divisions.  They would be Britain’s first Police dogs. Click Here to Read More…….. 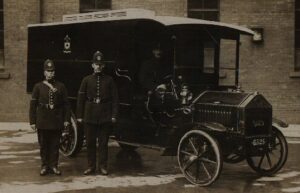 Glasgow Police buy a motor-van, to replace the horse drawn van (bought in 1878), to transport prisoners.  Right: The new motor-van with the crew of Constables James Best, Thomas Thomson and Robert Whyte (driver).

On 5 November, by Act of Parliament, the boundaries of the City were again extended:
Govan Burgh Police (122) and the District of Shieldhall merged with the Glasgow Police to form ‘K’ or Govan Division. Partick Burgh Police forms ‘L’ or Partick Division on the west side of the City.
Due to these changes, the Govan Police Pipe Band now took the title ‘The City of Glasgow Police Pipe Band.’

The First World War commences and 300 Glasgow police officers enlist in the Armed Forces. As a result, Chief Constable Stevenson employs 400 temporary Constables and increases the Special Constabulary to 3000 to guard strategic buildings and factories within the City.

Lieutenant John Trench dismissed from Glasgow Police for breaching Police regulations, by communicating undisclosed evidence to a solicitor which brought into doubt the guilt of Oscar Slater. Slater remained in prison until 1928.

The Chief Constable issues an order to deter policemen from enlisting in the Armed Forces due to the depletion of the force.

Police Committee discusses the appointment of Policewomen. It is agreed that one female be appointed and on 6 September, Miss Emily Miller was appointed Glasgow’s first policewoman.  Click Here to Read More…….

By the end of 1915, 692 Glasgow policemen had joined the Army or Navy….40 had been killed and a further 26 reported missing.

The Chief Constable announces that John McAulay, a Constable in the Northern Division, at that time serving as a Sergeant in the Scots Guards, had been awarded the Victoria Cross. The only Scottish Police officer to win the V.C., and one of only seven from UK Police forces to receive the honour.

First World War ends and it is announced that of the 748 Glasgow policemen who had enlisted for the War, 112 were killed and a further 33 were reported missing presumed killed.

On Friday 31 January, thousands of striking shipyard and engineering workers gathered in George Square to demonstrate in favour of a 40-hour working week.  During the demonstration, strikers stopped tramcars and attacked the drivers and conductors.  The Police intervened, with batons drawn, to save the tram crews and the strikers rioted. The Riot Act was read by the Sheriff but torn from his hands. Rioting continued into the evening with groups smashing windows as they went down Saltmarket to reach Glasgow Green.  Police in Jail Square came under a hail of bottles and one bottle struck Constable William McGregor (25) on his head and he died five months later as a result of his injuries.  Troops, mostly Scottish Regiments, arrived in the evening when the disturbances had ceased.  They guarded the railway stations and other buildings.   Tanks arrived three days later and were held in reserve in the Cattle Market on Gallowgate, but were not used on the streets.  There was no further trouble and leaders of the strikers were arrested for mobbing and rioting.   (Many books published regarding this incident repeat myths and unfounded assertions for politically based sensationalism and the majority fail to mention the constable who died as a result of his injuries).

A Police motor-van, conveying a senior Irish Republican Army officer, from the Central Police Court to Duke Street Prison, was attacked by 30 armed men in Cathedral Square. In the first volley of shots, Inspector Robert Johnston was killed and Detective Sergeant George Stirton was wounded as he and another detective returned fire. The attempt to release the prisoner failed. Thirteen men were later arrested and tried for the crimes, but they were found not guilty. Click Here to Read More…………….

Uniforms of the lower ranks changed to a more practical design. Two breast pockets were introduced and the belt dispensed with. Service stripes were also introduced for the lower ranks. Senior officers also had changes to their uniforms at this time. The photograph (right) shows the new, more practical, uniforms of the Inspector, Sergeant and two Constables on parade.

The strength of Glasgow Police was given as 2,248 made up of the following:

Glasgow Police cope with the many disturbances and riots that were part of the General Strike from 30 April until 12 May.

Cuts in Government benefits in August lead to marches by the unemployed and riots in Glasgow Green, Saltmarket and Jail Square. Fifty-one men arrested.

On 1 December, the new Chief Constable Percy J. Sillitoe is appointed and immediately set about re-organising the force. Detective Sergeant Bertie Hammond a fingerprint expert from Sheffield City Police transfers to Glasgow Police and establishes a Fingerprint and Photographic Department.

In August the Chief Constable declares the testing of black and white chequered cap bands by the Mounted Branch a success and authorises the issue of the cap bands, which will become popularly known as ‘The Sillitoe Tartan‘, to all other members of the force who wear caps.

Chief Constable Sillitoe’s new reoraganisational measures were sanctioned by Glasgow Corporation and by 1st November they came into effect. Four divisions; namely, Partick, Queen’s Park, St. Rollox and Western would merge with other divisions. There would be seven divisions:

Glasgow’s first radio patrol car tested by Chief Constable Sillitoe but it would be December 1933 before the radio system was installed and a further 3 years of exhaustive tests before the system was put into operation in May, 1936.

The Glasgow Police Identification Bureau assist Dumfriesshire Constabulary in identifying two dismembered bodies found near the town of Moffat. Detective Lieutenant Hammond and Detective Sergeant Duncan use new fingerprint techniques to identify bodies, as the fingers had been mutilated. Dr. Buck Ruxton of Lancaster, England, was arrested, found guilty and executed for the murders of his wife and her maid.

Outbreak of Second World War and Glasgow Police prepare for blackout and establishes the Air Raid Precautions Service (A.R.P) under the command of Superintendent James A. Robertson.

Many serving police officers join the Armed Forces and the Chief Constable recruits fit ex-policemen as the First War Reserve (350 men). The Police War Reserve (773 men), a second reserve force, was also recruited along with the Women’s Auxiliary Police Corps (220 women), who would assist as car drivers, communications operators and canteen staff.

The Special Constabulary (1,900 men), was recruited from the working population and reported for duty two evenings per week for patrol duties.

Chief Constable Sillitoe receives a Knighthood and resigns in February 1943 to take command of the Kent Constabulary.

VE-Day in May, bonfires and celebrations extend throughout the City.

Continue onto The Last Thirty Years