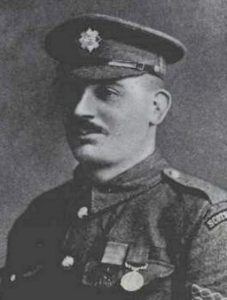 In the 21st. Century, there are few, if any, people who can comprehend the conditions and privation experienced by soldiers in the First World War. The winter of 1917 was particularly severe and the dawn of the 27 November was about to break over the trenches of the 1st. Battalion of the Scots Guards, the young soldiers were poised to ‘go over the top’ on the eighth day of the Battle of Cambrai. Despite the cold and damp, their morale was good. They had a job to do and knew how to do it. Like many companies of soldiers, ‘C’ company had a variety of experience, but the man they looked up to was their senior N.C.O., Sergeant John (‘Jock’) McAulay, a three-year veteran of the fighting who had already been decorated for bravery.

John McAulay was born on 23 December 1889 in Kinghorn, Fife. When he left school, like many before him he got a job as a miner. He was living with his parents at 4 Gillespie Terrace, Plean, Fife, and working in the local pit. He was a big man with ‘hands like shovels’ and the heavy work kept him fit.

Appreciating that there was more to life than working in the bowels of the earth, John applied for the Glasgow Police and was appointed as a probationary constable on 27 February 1911, and got accomodation in the Police Barracks in Blythswood Street. After four weeks initial training in the muster hall of the Central Police Office, Turnbull Street, Glasgow, he was appointed to ‘E’ (Northern) Division on 27 March that same year.

Working in the Northern Division of Glasgow was a very good ‘training ground’ for a young constable and John, now known to his mates as ‘Jock’, was settling in well and making a name or himself as a steady, reliable officer who was good to have with you in a fight. But, like so many young men in 1914, his life would be altered forever by global conflict.

When the First World War broke out in August 1914, young men from all walks of life volunteered for the Army and Navy. Within the first few months of the War, over 300 Glasgow police officers had joined the armed services and by 3 September 1914, Constable John McAulay was one of them. He went to the Scots Guards, where so many policemen from Glasgow, and many other Scottish police forces, found themselves. They were so highly regarded by the Scots Guards Commanders that their Guard of Honour for H. M. King George V at the State Opening of Parliament on 11 November 1914 was comprised mainly of policemen from Glasgow and other Scottish police forces.

When his battalion was posted to France, John McAulay and his comrades were thrown into some of the fiercest battles of the war, not least of which was the Battle of Ypres in July 1916. Now a sergeant, John was to win his first bravery decoration with characteristic flair and dogged determination. Faced with a stalemate in his platoon’s advance, John went forward and cleared several enemy positions. Faced with fire from a number of snipers, one of whom killed his young officer, John accounted for several of them single-handed and thereafter took command of his platoon. He was awarded the Distinguished Conduct Medal.

And so it was, almost eighteen months later, he was again in the thick of it. This time it was the Battle of Cambrai on Tuesday 27 November 1917, waiting to climb out of the trenches and to surprise the German troops in the village of Fontaine Notre Dame and the nearby Bourlon Wood. Both these objectives were heavily defended and we can only guess how the young men felt as they wondered if they would survive the day. Sadly, many of them would not.

By 1917, the military planners had, at long last, perfected the ‘creeping barrage’ of heavy artillery which pulverised the earth and anything in it, ahead of the advancing troops and the new tanks which had proved so successful the previous week. However, the tanks were late that day and would be sorely missed, but the troops advanced without them along the sunken road which ran from Cantaing to Fontaine. For the first fifty yards the banking at each side of the road provided cover, but the sides dropped away as progress was made along the road and the young Scots guards were exposed to withering machine gun fire from the German positions.

Sergeant John McAulay’s company commander, Lieutenant, The Honourable Arthur Kinnaird M.C. was one of the first to be hit by the hail of machine gun fire. A bullet struck him in his leg spinning him round, only to be struck in his back with another bullet. His plight was seen by John and he raced to bring him back to safety. He reached the stricken officer, lifted him onto his shoulders and headed back to the cover of the Guards’ position. Twice, bursting shells knocked him down but he rose again only to be met by two German soldiers trying to cut him off. He killed both of them and continued back with the dying officer on his shoulders. 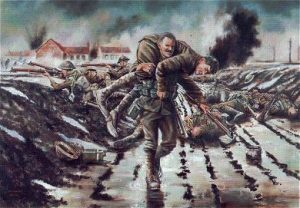 The strength of the German defence of the objectives caused the Guards’ attack to falter and, realising that a German counter attack was inevitable, he rallied his men and assumed command of ‘C’ Company as their senior N.C.O. His company’s position was exposed on the left flank and John set up a defensive position. He even brought up a Lewis Gun himself, when the machine gun failed to function, and was instrumental in killing more than fifty Germans, as the young Scots soldiers repelled the attack.

After the battle, Lieutenant-Colonel Sir Victor MacKenzie, Sergeant McAulay’s commanding officer, recommended him for a gallantry award, sending the following report to the General:

‘He took command of the company after all his officers had been hit, cheered and encouraged them, brought back Arthur (Kinnaird) and many wounded men from positions of danger, beat back a counter attack, killed several Germans and was altogether splendid. I am recommending him for a V.C., but they are hard to get’

The recommendation was successful and on 13 January 1918, Sergeant John McAulay was informed that he had been awarded Britain’s highest bravery award, The Victoria Cross. He was immediately brought back from France and two months later was presented with his medal by King George V at a ceremony at Buckingham Palace. He was the only Scottish police officer to win the decoration while serving in the forces and one of seven police officers in Britain to do so.

When the news reached Glasgow it was a welcome respite from the daily news of casualties. It was something to cheer about and every member of the Glasgow police was proud of the credit John had brought to the force. However, it would be almost a year before John would be back in Glasgow, when he was demobbed from the Army on 25 January 1919. At this time he had a romance with a woman, Helen MacLean, who bore him a son. But there was to be no happy ending, the couple split up and the child was adopted and given the name James Harding. 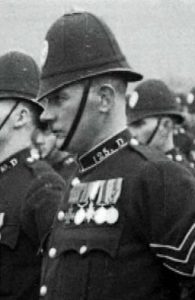 Constable John McAulay returned to ‘E’ (Northern) Division of Glasgow Police, got married to Isabella Horn, and lived at 154 Oxford Street. Within a few weeks, on 11 June 1919, he was promoted to Sergeant (photo left), such was the high esteem in which he was held. He was initially posted to ‘H’ (Maryhill) Division, but a few weeks later transferred to ‘D’ (Southern) Division. During his time there he passed his Inspectors’ Certificate on 10 June 1920. Unfortunately, after complications in childbirth, his wife Isabella died.

On 11 November 1921, a bronze War Memorial tablet, bearing the names of the 173 Glasgow Police officers who were killed or missing, was unveiled in the crypt of Glasgow Cathedral. Sergeant John McAulay, representing the force, laid a wreath on the memorial. The officers and men of the force, together with the City dignitaries, then marched from the Cathedral to the Central Police Office, Turnbull Street, where an exact replica of the Cathedral memorial was unveiled on the wall of the police office, within the quadrangle. This memorial is now in the Glasgow Police Museum.

John McAulay served in ‘D’ (Southern) Division and, on 27 September 1922, he was promoted to Inspector. In 1923 he remarried and he and his wife Catherine had a daughter, Isabel. On 9 June 1926 he was transferred to ‘A’ (Central) Division, where he would remain for the rest of his service. He served throughout the Second World War and retired on 31 January 1946 with 34 years 339 days service (see photo below right).

John died at his home at 915 Aitkenhead Road, Glasgow on 14 January 1956 aged 67 and was buried in New Eastwood Cemetery, Glasgow.

It is interesting to note that in February 1918, the following poem was written about John’s bravery by the Ayrshire poet, Matthew Anderson, in his poem ‘John McAulay V.C.’

John McAulay’s story is frequently retold in the Glasgow Police Museum where a display dedicated to him is admired by visitors every day.