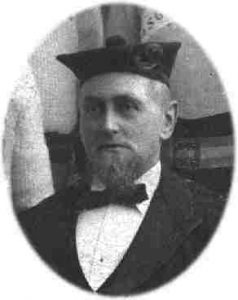 Father of Charles Rennie McIntosh
William McIntosh was born at Belturbet, Ireland, in 1836 and joined Glasgow Police as a Clerk on 17 March 1858. His intelligence was soon recognised by Chief Constable James Smart and he was quickly promoted to Inspector in charge of the Chief Constable’s Office. He was promoted to Lieutenant in 1864 and Superintendent in 1889, still retaining his post which had grown proportionately in workload and responsibility.

He was never in the public eye or actually performed police duties as we know them, instead he ensured the smooth running of the administration and organisation of the force for more than forty years.

William McIntosh is best remembered for his interest in Police Sports. He was an accomlished rifle marksman and won many trophies as one of the first members of the 19th. Lanarkshire Rifle Volunteers. He was also a founder of the Glasgow Police Athletic and Rowing Club in 1882 and was their Honorary Treasurer and Captain of the Tug-of-War Team. He lead the team in competitions at the International Exhibition in Glasgow in 1888 and in Paris in 1889 when the competitions were held in Buffalo Bill’s Showground on the outskirts of the French Capital.

He was married and had three daughters and two sons. His youngest son Charles Rennie McIntosh was an architect and designer and is admired as the greatest Scottish designer of the 20th.Century. He designed furniture, buildings and jewellery and his work is appreciated by admirers from all over the World.

The McIntosh family changed the spelling of their name to ‘Mackintosh’ in the late 1880’s.

William McIntosh retired from Glasgow Police on 1 October 1899 after forty-one years’ Service, and died on 10 February 1908 at the age of 71.