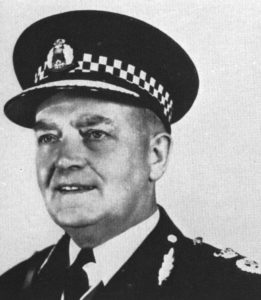 JAMES A. ROBERTSON was born in 1906. The son of a police sergeant, he worked as a railway clerk before joining Glasgow Police in 1926.

As a young constable, he studied and gained a Law Degree.  He moved quickly up the ranks and, by the age of 33, was Superintendent in charge of Civil Defence in Glasgow. He was awarded an M.B.E. for his work in 1949.  He was an expert police administrator and worked in many Headquarters departments during his service.

During his period of office, many changes took place.  Not only in policing, but the social changes effecting the City of Glasgow as a whole.  Old tenements were being demolished and the residents scattered to the outlying areas of Castlemilk, Drumchapel and Easterhouse.  One of his responses to juvenile crime was the involvement of the force in the Easterhouse Project.

The role of television in preventing crime was developed in April, 1964, when Police Call was broadcast by Scottish Television. Broadcast once weekly, a Glasgow Police officer warned householders of crimes in their areas and circulated descriptions of wanted criminals.