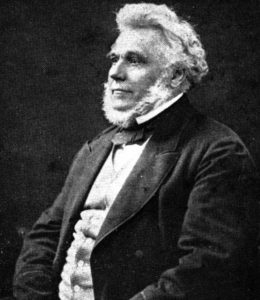 Henry Miller was appointed Superintendent of the Glasgow Police on 10 April 1936.

He served the City well and was involved in putting down the Cotton Spinners’ Strike of 1836 when strikers shot dead a fellow worker who did not join the strike and also threatened to shoot City leaders and prominent businessmen. A reward of £500 for information was successful and it was disclosed that the leaders of the strike would be meeting in the Black Boy Tavern on Gallowgate on the following Saturday evening.

At 9pm on the Saturday evening, Superintendent Miller and 20 police officers met Sheriff Allison near the Black Boy Tavern. He stationed 16 of the officers around the tavern to prevent escape and took the other four officer with him inside. They quietly ascended the stairs to the meeting room and opened the door. In the room, seated at the table with money spread out in front of them, were sixteen conspirators.

All 16 were arrested without resistance and taken to the Toolbooth Jail. On 8 January, 1838, at the High Court in Edinburgh, all 16 were transported to Australia for 7 years.

He retired in 1844 and was presented with a gold watch by the officers and watchmen as a token of their esteem. He later served as Superintendent of Liverpool Police for a few months and went on to become Governor of Glasgow Prison and Superintendent for Prisons of Lanarkshire.

On 10 April 1848, following the resignation of Chief Superintendent William Henry Pearce, in the aftermath the Bread Riots of that year, the Glasgow Police Committee again approached Henry Miller to succeed Pearce.

He accepted the post and tried to persuade the commissioners to make a number of improvements, including a prison van to convey prisoners. His proposals were turned down but, given time, it is likely that Mr. Miller would have succeeded in introducing many improvements in the overall working of the Glasgow Police, but his health broke down. After nine weeks sick-leave, he resigned on 4 December 1848.