About 2 am on Tuesday 1 June, 1965, Constable Thomas Baird of the Northern Division, City of Glasgow Police, was finishing duty when he was stopped by Constable William Graham, who told Constable Baird that he had seen a man acting suspiciously at the Rob Roy Public house in Royston Road, Glasgow.   Constable Baird joined Constable Graham in his police car and they went to where the man had been seen. 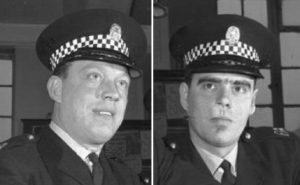 They saw the suspicious man at the corner of Craighead Street and both officers got out of the police car and approached the  man.  They noticed he was concealing something under his jacket and when they asked him what it was, he produced a sawn-off shotgun and pointed it at the Constables, threatening to shoot them.

When the man pointed the gun at Constable Baird’s face, the officer grabbed the gun and he heard a click as the gun misfired.  He grappled with the gunman for the gun and during the struggle, the man pulled the trigger again and the gun fired.  Constable Baird felt the blast passing his face and put his had up to protect it, releasing his grip on the gun.    He was only slightly injured by the blast.

The man, whom they recognised, ran off, pursued by the two Constables.  They brought the man down with a rugby tackle but when he got to his feet the man again aimed the gun at the Constables.  The man ran off again but the Constables went to the police car and gave chase.   When they caught up with the gunman, he fired at the police car, breaking the back window.   The gunman then ran off into the grounds of a school.  The grounds were searched by armed officers but the gunman had made good his escape.   He surrendered himself to the police the next day.

Both Constables were awarded the George Medal for the courage and gallantry they exhibited in attempting to arrest the gunman.