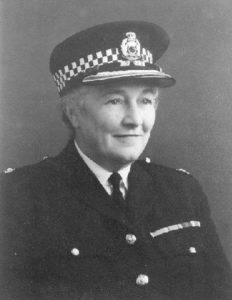 Janet Gray, a native of Gloucestershire, joined the Gloucestershire Constabulary in in 1927 and in 1931, she transferred to the City of Glasgow Police. She was stationed in ‘F’ (Maryhill) Division.

In 1940, she was transferred to ‘H’ (Headquarters) Division where she remained for the rest of her service. In 1941, she was promoted to Policewoman Sergeant and in 1947 she was awarded the British Empire Medal for Distinguished Service.

In 1959, Miss Gray was promoted to the rank of Superintendent, again the first to hold the rank in the Glasgow Police, and in 1961 retired from the City of Glasgow Police and was appointed Scotland’s first Assistant Inspector of Constabulary for Scotland.