Sergeant Peter Macrae of the Marine Division, City of Glasgow Police, was called to a house in the Drumchapel area of the City regarding a shooting incident where a man had already been injured. 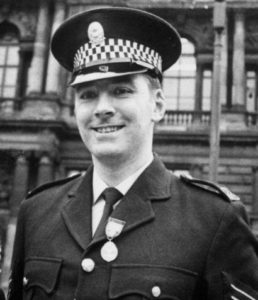 He was awarded the British Empire Medal for Meritorious Service for the courage and gallantry he displayed during the arrest.   He was also awarded the Glasgow Corporation Bravery Medal.