Constable Stuart McDonald of the Marine Division, killed by a train while in pursuit of two thieves near Dumbarton Road, Yoker.

Several shots fired by a housebreaker being chased by police officers. Police cars damaged, but none of the officers were injured. The culrpit was knocked down by a Police vehicle and arrested. He received 5 years imprisonment.

Constable James Robertson arrested for the murder of his girlfriend by running her over several times with a stolen motorcar, in Prospecthill Road. He was tried, found guilty and executed on 16 December 1950.          Read More………..

Changes to Glasgow Police uniforms mean the end for the helmet, when it is replaced by the peaked cap for all ranks on dayshift.

The stand-up collars of the tunics also make way for the open-neck design with a blue shirt and black tie. The old style tunic and helmet continues to be used on nightshift, as an economy measure, until 1952.

Detective Chief Superintendent Gilbert McIllwrick, head of Glasgow C.I.D., sets up the mobile Fying Squad of detectives, it was a success and many arrests followed.

September
A housebreaker, known as The Nighthawk, breaks into a large number of houses in the Partick area while the occupants are asleep. Detective Constable Frederick Tiplady of the Marine Division, on seeing the suspect on a tram car in Argyle Street, gives chase and the man threatens him with a revolver. Despite the threat, Constable Tiplady summons assistance and continues the chase. The man is traced to a nearby house and, after a violent struggle, is arrested. He received 7 years imprisonment. D.C. Tiplady received the Queen’s Commendation for Brave Conduct and the Glasgow Corporation Medal for Bravery.

A few days later on 4 September, Constable John McLeod of the Marine Division is killed and Constable Thomas McDonald, also of the Marine Division, is seriously wounded by man, Edwin Finlay, in Hyndland Road. Finlay was wanted for embezzlement and when approached by the officers, opened fire with two pistols. He was chased into Westbourne Gardens Lane where, whilst surrounded by unarmed officers, turned one of the guns on himself. He died a short time later. Constables Thomas McDonald and Charles Hill receive the British Empire Medal for Gallantry.  Read More……..

Lanarkshire Constabulary request the assistance of Detective Superintendent Alexander Brown and Detective Inspector Thomas Goodall of Glasgow C.I.D. to investigate a number of unsolved murders that had taken place over the previous two years. Extensive enquiries led to the arrest of Peter Manuel, Scotland’s infamous mass murderer who killed eight people. He was tried at the High Court in Glasgow, found guilty and executed on 11 July 1958.  Click Here to Read More……..

Constables William Hazelton and Bernard Thompson of the Central Division, are attacked by a large group of men in Kidston Street, Gorbals. Constable Thompson is seriously injured and Constable Hazelton stands astride his injured colleague and fights off the crowd with his baton. He is assisted by a civilian, Roderick Charles, and manages to drag Constable Thompson into a doorway. Later, as a result of inquiries, six men were arrested and sentenced to various terms of imprisonment.

A Regional Crime Squad is formed with detectives from Glasgow, Lanarkshire, Dunbartonshire and Renfrewshire joining forces to combat crime committed by travelling criminals.

Personal radios begin use in the Pollok area of Govan Division. Following their success, the radios are extended to every beat constable in the City.

The Unit Beat Policing system is introduced by Chief Constable Robertson and Panda cars become a frequent sight in the City.

July
Detectives come under fire when they attempt to arrest a murder suspect in Holyrood Crescent. During the subsequent chase across the north of the city a further twelve civilians are wounded, one fatally, by the heavily armed murderer, James Griffiths. He is finally cornered in a top-flat house at 26 Kay Street, Springburn, by several police officers and Chief Superintendent Malcolm Finlayson has no alternative but to shoot Griffiths and he dies at the scene. Chief Superintendent Finlayson and several other police and civilians are awarded the Glasgow Corporation Medal for Bravery. Read More…..

A Rangers versus Celtic football match at Ibrox Stadium results in the deaths of many football supporters. Glasgow Police investigate the circumstances and give evidence to the subsequent enquiry. 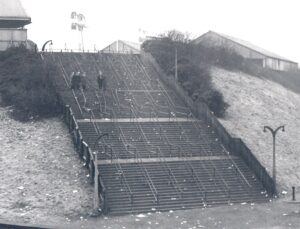 The City of Glasgow Police stood down on 15th May 1975 with the formation of Strathclyde Police.