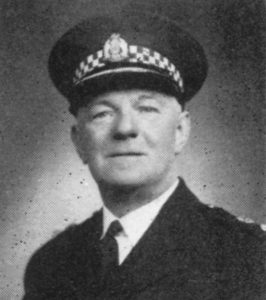 A native of Kirriemuir, Fraser Farquharson had worked as a clerk in a Glasgow office but joined the City of Glasgow Police in 1920.

He worked his way through the ranks becoming the Chief Clerk and receiving the M.B.E. in 1953 for services to policing. In 1957 was promoted to Assistant Chief Constable. In 1960, he was appointed Deputy Chief Constable.