In August 1817, Calton was granted its Burgh Charter. The Burgh was situated on the east side of the City and included Bridgeton and Mile-end. The resident had the reputation of being ‘exceedingly lawless and unruly weavers’, and the Council embarked on measures to control them.

Provost Stevenson swore in a large number of citizens as special constables from 30 September 1817 until the Police Act was obtained on 23 March 1819. They were each issued with a baton and a numbered brass badge of authority. 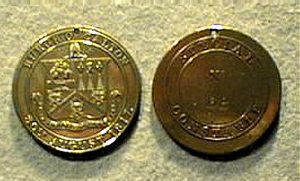 The first Superintendent of Police was John Hamilton who was appointed to head the new force of 3 sergeants and 16 watchmen.  His police officers wore top hats, dark blue tail-coats and white trousers.  The white trousers were chosen to make the officers instantly recognisable .

The first police office was next to the Lancastrian School in Green Street and consisted of an officer’s room and two or three cells adjoining it. John Hamilton remained in charge of the force until 1833, when Bryce Smith took command. Mr.Smith’s tenure lasted only one year and he was replaced by John Gilliland in 1834, who was in turn replaced by Superintendent James Smart in 1835.

He remained in charge until the force was annexed by Glasgow Police in 1846, then was retained as Assistant Superintendent in charge when the force became ‘C’ or Eastern Division. James Smart later became Chief Constable of Glasgow.