ALEXANDER McCALL was born on 12 February 1830, at Ayr.  He had a University education and worked for some time as a lawyer in Ayr before joining Glasgow Police Detective Department as a clerk.  In 1850, he was promoted to Inspector in charge of the Detective Department, a post he held for eight years.  In 1858, he was promoted to Assistant Superintendent in the Central Division and in 1862, was appointed Superintendent. 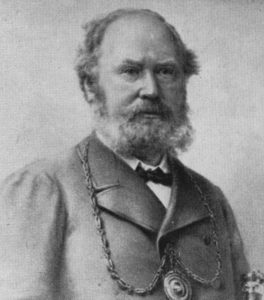 On 7 June, 1870, McCall was appointed to succeed James Smart, as Chief Constable, a post he held for 18 years. In June, 1887, he became ill and was incapacitated for six months. The Police Committee granted him £200 in recognition of his services to the City, to enable him to seek relief from his illness in the South of France. He died on 29 March, 1888, and was buried in the Glasgow Necropolis.

The memorial marking his grave was designed by Charles Rennie Mackintosh in the form of a Celtic Cross. This was the young designer’s first documented commission.