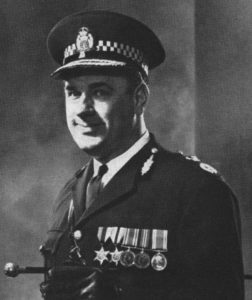 DAVID B. McNEE joined Glasgow Police on 29 April 1946 and, after training, was posted to the Marine Division (‘B’) graduating to his own beat in Partick.  In 1951, he remained in the ‘Marine’ when appointed Detective Constable and was promoted to Detective Sergeant in Govan Division (‘G’) in 1962.

On 13 March 1977, David McNee was appointed Commissioner of the Metropolitan Police and was knighted in 1978. He retired after 5 years as Commissioner.

In his retirement, he accepted the post as Honorary President of the Glasgow Police Heritage Society of which he was a keen supporter.