When Chief Constable John Boyd took ill and resigned on 8 January 1902, the Police committee received 94 applications for the post.  In the end, they appointed James Verdier Stevenson as Chief Constable of Glasgow, the post he took up on 8 April 1902. 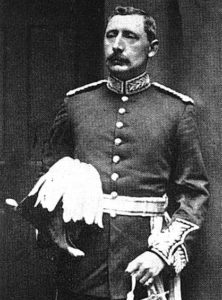 James Stevenson had been born on 5 July, 1858, in Athlone, Co. Westmeath, Ireland.  He joined the Royal Irish Constabulary in 1884 and rose to the rank of District Inspector, before being appointed Chief Constable of Glasgow, at a salary of £1000 per annum.

During his term of office he was was awarded the King’s Police Medal for Distinguished Service on 6 February, 1913 and in 1914, during a visit to Glasgow by King George V,  Mr Stevenson was made a Member of the Royal Victorian Order (M.V.O.), a personal decoration from the sovereign. In 1918, he was made a Commander of the Order of the British Empire (C.B.E.).

He was a stranger to Glasgow and relied heavily on the guidance of his immediate subordinates, Superintendents John Orr and Alexander Mennie.

He has seven children and lived at ‘Dunacre’, Beech Avenue, Bellahouston.

He resigned on 31 March 1922, having been Chief Constable of Glasgow, through some of the most turbulent times in its history.  On 2 June 1921, he also suffered the loss of his son, Detective Inspector Edward James Stevenson, Royal Irish Constabulary, in an I.R.A. ambush at Carrowkennedy, Co. Mayo, one of six officers killed there that day.