William Henry Pearce was born in Sussex in 1793.

In August 1807, at the age of 14 years, he joined the 91st. Regiment (Argyll & Sutherland Highlanders) and served with them until August 1814, by which time he had attained the rank of Sergeant. In 1815, he joined the 18th. Hussars and fought at the Battle of Waterloo. He left the Army in 1821 with the rank of Drill Sergeant Major. 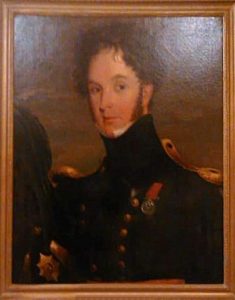 The post of Chief Superintendent was created in 1847 following the amalgamation of Glasgow Police with the three surrounding burghs of Calton, Gorbals and Anderston on 12 November 1846.

William Pearce served only one year as Chief Superintendent and resigned on 10 April 1848. His reason for resigning was severe criticism being leveled at the Glasgow Police for their handling of a serious riot on 6/7 March 1848, in which two men were killed.

(image by kind permission of Mr I Pearce)