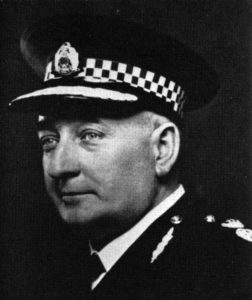 Malcolm McLeod McCulloch was a native of Glasgow but was educated at Fort William High School. After schooling, he served as a deck-hand on Sir Thomas Lipton’s Yacht, the Erin. He joined the City of Glasgow Police at the age of 18 and was the youngest person to join the force, anecdotally on the recommendation of Sir Thomas.

He was appointed to the Marine Division (presumably due to his previous seafaring experience) and after a period of street duty, was selected for clerical duties in the Chief Constable’s office. He was engaged in administrative duties for the remainder of his service, progressing through the ranks from Sergeant, Inspector, Lieutenant and Superintendent and Chief Clerk.

In 1941, he was awarded the King’s Police Medal for Distinguished Service.

In 1945, following the end of the Second World War, he received the King Christian Medal (Denmark) and the Medal of Freedom (U.S.A.) in recognition of the work of the Glasgow Police Aliens Branch during the War.

In 1947 he was appointed as Commander of the Order of the British Empire (C.B.E.).

He retired on 1 January 1960 and on the Queen’s Birthday Honours in June of that year, he received a Knighthood from Her Majesty the Queen.