Police officers called at a house in Glasgow while making enquiries into a case of murder. The officers were resisted by the occupant who fired a shotgun at them three times, wounding one of them and forcing them to take shelter.   Assistance was summoned and a police cordon was drawn around the area. Firing continued from an upstairs window, seven persons being struck by bullets and during this period a constable and an ambulance attendant were shot at while rescuing an injured man.  The gunman made good his escape from the house and the area by stealing a car after having shot at the occupant who was injured. A short time later he entered a public house carrying two guns and a customer on the premises was shot twice and subsequently died. On leaving the public house the gunman continued to fire the shotgun and rifle indiscriminately and a civilian who tried to tackle him was wounded in the right arm.
The gunman next took possession of a stationary lorry and drove off followed by a taxi which had been commandeered by a passer-by. The lorry was abandoned at the end of a cul-de-sac and the gunman, having entered a tenement building, gained access to a house on the top floor by firing at the lock. From a window he fired many shots at a children’s playground and also into the street where a considerable number of people had gathered. Two armed officers, Chief Superintendent Finlayson and Sergeant Smith arrived and went up the stairs of the tenement to the door of the house in which the gunman was hiding. Through the letter box they saw the man who, realising they were there, turned his gun on the door. One of the officers fired through the letter box and the other pushed open the door. They then dived into the hallway and overcame the man who, although wounded, was still able to fire another shot. The man was removed from the house and taken to the street. The gunman had fired approximately 180 rounds of ammunition from a -22 rifle. Chief Superintendent Finlayson and Sergeant Smith displayed a high degree of courage in facing up
to and dealing with a dangerous criminal who was known to be armed and who, by his previous actions, had clearly demonstrated that he was determined to evade arrest by the use of firearms without any regard to the probable consequences.  (London Gazette 29 September 1970) 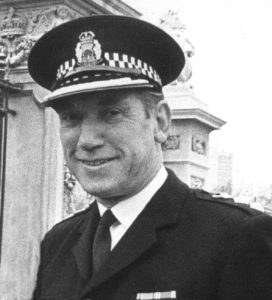 MALCOLM FINLAYSON was born in Glasgow on 25 January 1911, and joined the City of Glasgow Police on 6 August, 1932.  He was posted to ‘B’ (Western) Division and later transferred to Headquarters (Firearms and Pay Section).

For his gallantry in the incident mentioned above, Chief Superintendent Finlayson was honoured as a Member of the Order of the British Empire (M.B.E.) for Gallantry and the Corporation of Glasgow Bravery Medal.

On 24 September 1969, he was promoted to Cheif Superintendent in charge of ‘F’ (Maryhill) Division and  retired on 3 January 1971. 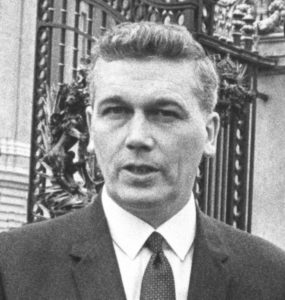 IAN SMITH was born in Cambuslang on 25 April 1025.   He served in the Royal Air Force for six years before joining the City of Glasgow Police in 1951. He was posted to ‘C’ (Eastern) Division.   He was appointed Detective Constable in 1960 and in 1966, He was promoted to Detective Sergeant in the Flying Squad.

For his gallantry in the incident mentioned above, Detective Sergeant Smith was awarded the British Empire Medal (B.E.M.) for Gallantry and the Corporation of Glasgow Bravery Medal.

In 1979 , He was promoted to Detective Superintendent in ‘F’ Division and retired from there on 18 November 1984.