About 12.15 am on Saturday, 19 December, 1953, a man and woman were walking on Craigendmuir Street, Blackhill, Glasgow, when they were attacked by two men.  One of the attackers had a pistol and fired it at the man’s feet but it missed.  The man then tried to run away but the gunman caught up with him and hit him about the head and face with the pistol, causing him to collapse. 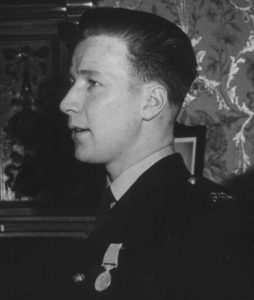 At this time, Constable Thomas McShane of the Northern Division, City of Glasgow Police, emerged from Provan Gas Works where he had his refreshment period, when he heard the gun shot from nearby Craigendmuir Street.  He immediately ran towards the direction of the gun shot and saw two men struggling on some vacant ground.  As he ran towards them the gunman’s accomplice shouted a warning to the gunman and they both ran off, pursued by the young Constable.

Constable McShane managed to overtake the gunman and arrest him.  The Constable took possession of the pistol which was still in the gunman’s possession.   When the gunman realised that the young Constable was alone, he began to struggle and fight with him, but was soon overcome by the officer.  The officer blew his whistle which attracted the attention of a passing ambulance, the driver then radioed for assistance.    Assistance soon arrived and the gunman was taken into custody.

Constable McShane was awarded the British Empire Medal for Meritorious Service  for the courage and gallantry he displayed in his arrest of the gunman.  He was also awarded the Corporation of Glasgow Bravery Medal.