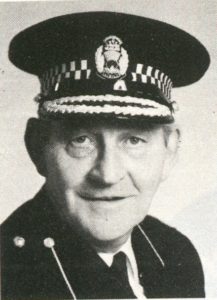 James Kelson joined the City of Glasgow Police in 1929 and, after three years of beat duties, transferred to the Pay Department at Headquarters. While serving as a Constable, James Kelso graduated as a Batchelor of Law at Glasgow University.

In 1960, he was transferred to Headquarters as Chief Clerk and was awarded the Queen’s Police Medal for Distinguished Service in the Queen’s Birthday Honours List in 1961.