Charles Fraser was born on 26 March 1892 at Duntocher, near Glasgow.  After schooling, he enlisted in the Argyll & Sutherland Highlanders in 1909.

In 1914, his battalion went to France and he was decorated on three occasions, being awarded the MC, DCM and MM for bravery and initiative under heavy fire.  This is an almost unique combination of gallantry awards to one man in WW1.

He joined the Glasgow Police in 1921 after discharge from the Army and was posted to ‘A’ (Central) Division.   In 1927 he was appointed as Detective Constable in ‘C’ (Eastern) Division.

In 1930 he was promoted to Sergeant in the Training School and remained there when promoted to Inspector in 1933 and  Lieutenant in 1936. 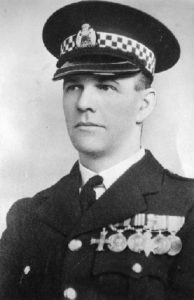 In 1937 he was appointed A.R.P. Officer for Glasgow and was awarded the British Empire Medal for Meritorious Service in 1938.  He was seconded to Glasgow Corporation as Assistant Co-ordinating Officer for Air Raid Precautions in Glasgow.

In 1942 he resigned from Glasgow Police to become Co-ordinating Officer for Civil Defence in Glasgow.

In 1946 he was honoured by King George VI who made him a Member of the Order of the British Empire (M.B.E.) for services to Civil Defence.