JANET BEATTIE (nee MORRISON) was born in Glasgow in 1907 and after the First World War, she married a young policeman, John Beattie.  They had two boys.

In 1936, after a short illness, Detective Sergeant John Beattie died. 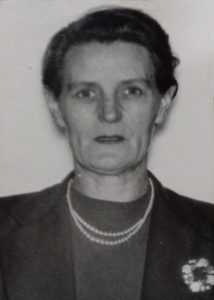 As a widow with two small boys to support, she joined the Glasgow Police on 22 March 1937.  At that time, the force had only 14 policewomen.

She was promoted to Sergeant in 1949 and Inspector in 1953, with responsibility for the growing number of policewomen in the Glasgow Police.

In 1955, she was awarded the British Empire Medal for services to policing.

In 1959, she was promoted to Chief Inspector, and in the same year was awarded the Police Exemplary Service Medal.

Two years later, in 1961, She was promoted to Chief Superintendent in charge of the Policewomen’s Department  of Glasgow Police.